A message from our town herd! KEEP US WILD! NOT FED.
City of McCall Wildlife Campaign 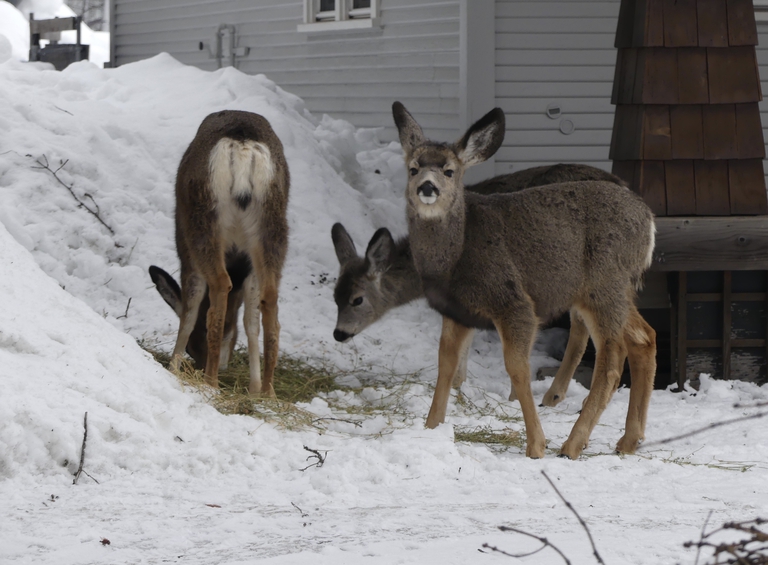 Feeding elk or deer in town and adjacent to busy streets is hazardous for both deer and motorists. Fish and Game staff responds to dozens of reports of injured or road-killed deer in and near towns. The problem gets worse during winter when deep snow means roads and streets may be the only routes for animals to travel. Fish and Game does not have the capability to rehabilitate injured wildlife, so when a deer is hit and appears unable to recover, it must be put down.

Deer, elk, and moose can be aggressive, especially when they lose their fear of people. Though deer are typically docile, under stressful circumstances they have a flight-or-fight response, and sometimes respond to perceived threats with aggression. Does with young fawns have chased people and attacked dogs, and bucks in breeding season can behave aggressively, including injuring people.

When deer or elk congregate or repeatedly feed in the same spot, predators take a cue from their routine. Deer and elk are mountain lions’ primary prey, and the large cats will hunt whatever is most easily available to them. Fish and Game receives multiple reports of mountain lions in towns each year, and they can pose a threat to people and pets. If there’s a conflict between mountain lions and people, it can result in lions being euthanized.

Deer and elk won’t stop eating when you’re done feeding. When deer or elk start congregating in an area, they will eat whatever is available, which may be landscaping or ornamental plants. This can damage property and cause conflicts between people who are feeding and neighbors whose property is damaged.

The food that people provide can be harmful to deer.Deer digestive systems are equipped to deal with small bits of low-quality food, especially during winter.
Large amounts of highly nutritious food, such as alfalfa or pellets, can overwhelm their digestive system and lead to bloat and potentially death, especially in young animals.
Feeding elk or deer can stop them from migrating to where natural food is available. Most mule deer migrate to lower-elevation ranges during winter. Feeding over time may cause animals to lose their knowledge of migration routes to winter range.
Damage to native vegetation near feeding areas can also be a problem. Trees and shrubs, especially aspen and willow, can become heavily damaged and take a long time to recover.
Crowding creates conditions that can lead to disease outbreaks.
Wild animals need to remain wild. It’s understandable that people enjoy seeing them close to their homes, but when animals lose their wildness, they’re likely to lose their innate fear of humans and become too comfortable around people and in towns. That behavior can also be passed on to the next generation.

But Doesn’t Fish and Game feed big game?
The short answer is no, except for emergency reasons, such as extreme winters. During most winters, snow depths and temperatures do not threaten big game herds, and most of the animals have enough fat reserves to carry them through until spring.
Reasons for temporary, emergency winter feeding may include extreme weather conditions where big game forage becomes limited, or unavailable, for prolonged periods, preventing conflicts between big game and agriculture operations, and public safety concerns, such as big game herds congregating near freeways.
Overall, Fish and Game manages big game herds so naturally available forage can sustain their populations, and people can help by not feeding animals and keeping the “wild” in wildlife.